You are here: Home > Elastic Enterprise > Vodafone and the Enterprise Cloud 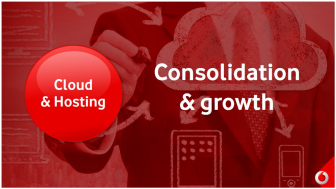 We recently talked to Vodafone at their 2014 enterprise analyst summit. Enterprise is an important segment for Vodafone. The enterprise share of group service revenue has increased from 23% in 2012 to 27% in 2014 totalling £ 10.7B; 77% of 2014 enterprise revenues can be attributed to wireless and 33% to fixed (source: annual report 2014).

At the same time, Vodafone’s European enterprise (and consumer) markets continue to be depressed because of the their dependence on traditional communications services revenues and the lackluster state of the European economy. Enterprise growth for Vodafone increasingly comes from countries like South Africa, Kenya, Turkey and India.

While at last year’s analyst event Vodafone’s enterprise cloud vision had not fully crystallized yet, there was more meat on the bone this year. The long term vision is to be the provider of choice for network connected cloud and IT services for enterprise. The short term actions are to invest in improving customer experience, expand geographically (Germany) and develop private cloud capability and public cloud partnerships. Further down the road this will lead to a hybrid network-based intercloud and new (yet to be developed) network-relevant hybrid services and total communications from Vodafone on top.

For its public cloud partners (Azure, Google, AWS, VMware, HP Helion and Softlayer) Vodafone is developing a set of partnerships:

During 2015 and 2016 Vodafone’s hybrid network-based intercloud is expected to increase coverage to include 92 countries, 224 cities and 322 POPs. This network will be an application aware IP-VPN based on Cisco network embedded technology. The network will provide customers with visibility on which apps are consuming network resources and a second release will provide an application SLA over the WAN and virtualisation technology for connectivity to hosting/data centres. EMC and VMware are Vodafone’s go-to-market partners for private cloud.

The Vodafone private cloud is live today in the UK, Germany, South Africa, Turkey and New Zealand. Ireland and The Netherlands will follow in 2015 and Italy and Spain in 2017. Vodafone’s potential African cloud footprint is also worth noting, the company already operates 16 data centres in 6 countries in the region.

Vodafone’s strength in cloud is in the UK and in its global and local network infrastructure. We believe Vodafone is right in not pursuing its own public cloud but partnering with key public cloud partners instead. It will be more difficult for Vodafone to expand its private cloud offer significantly beyond its current UK base to mainland Europe, as there are many more local and global private cloud providers that already have established operations. A 2% growth percentage in cloud & hosting is not enough to catch up with these players. In emerging economies in Africa and Asia Vodafone will find it easier to compete. Last but not least, customer demand for network-relevant hybrid services is not easily identifiable with internet-based SaaS providers gaining enterprise popularity.

From The Virtual ICT Research Network: Predictions 2012
Expanding The Public Cloud Opportunity: How To Grow Your XaaS Portfolio
The Future Of The Network Is Software Defined
Data Centers – The New Industrial Estates