You are here: Home > Elastic Enterprise > Segmenting The InterCloud Opportunity

We wrote about the InterCloud before, defining it as a globally interconnected data center grid offering elastic store and compute capabilities. The most prominent builders of the InterCloud today are Amazon, Google, Microsoft and Rackspace. They are all building general purpose global clouds with a focus on elasticity (see Figure below) and providing APIs for interworking. This is a tough market to compete in as recent gloomy results from Rackspace and a withdrawal from Dell from selling these services direct have shown. The latest attempt of entering this space comes from VMware that recently launched its public cloud service, squarely aimed at the plethora of companies that operate private VMware infrastructure – such as vBlock from VCE – and want to be able to tap into extra VMware capacity on an on-demand basis. 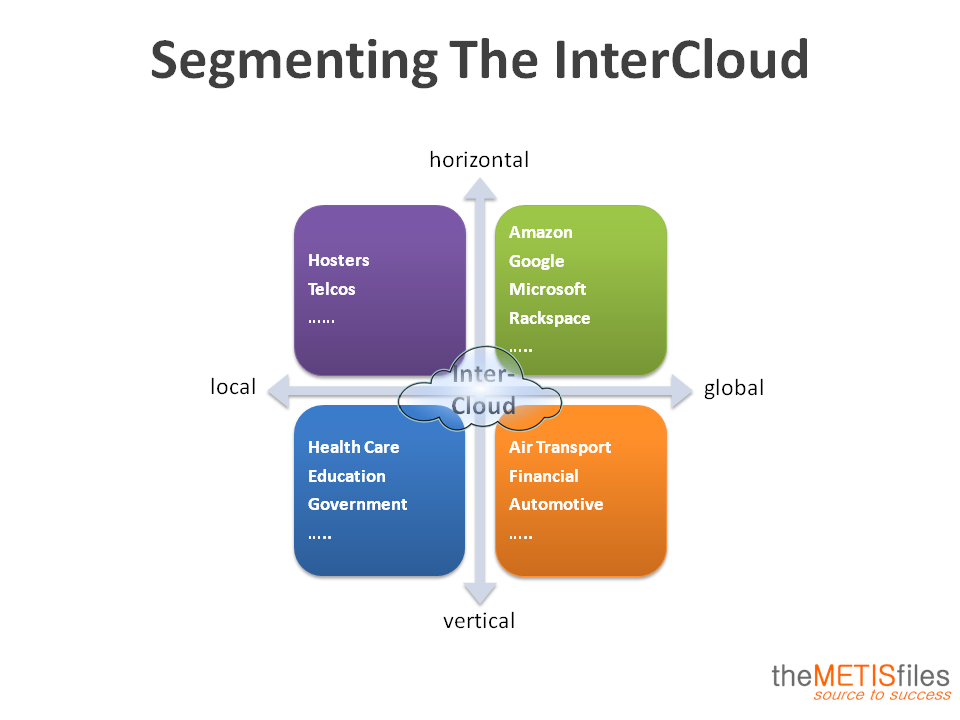 But the cloud opportunity extends beyond building a global grid, with opportunities for value-added store and compute services from a branch, workload, local or compliance perspective. Examples of local horizontal public infrastructure clouds in the Netherlands, for instance, can be found in abundance in our Dutch public cloudscape.  An example of a global vertical cloud is the partnership between SITA and Orange Business Solutions, the Air Transport Industry (AT) Cloud. Another global vertical cloud example is the IBM SmartCloud service for consumer electronics firms. What these vertical clouds have in common is a focus on the specific needs of the industry rather than a general purpose store and compute play.

At the moment the local vertical initiatives in the Netherlands focus more on cloud aggregation (e.g. Surf Conext in the education sector) rather than building out a local cloud infrastructure. Similarly in the UK, the G-Cloud (government) is more about aggregation. One of the Dutch initiatives that aims to build a vendor neutral big data cloud hub is the Dutch Health Hub, part of the City of Almere DataCapital initiative. We expect more initiatives are in the pipeline.

Up and coming IaaS players should choose their market carefully and realise that rather than compete horizontally with global players such as Amazon, the more attractive and higher margin opportunity is likely in building vertical value-added infrastructure clouds.

Do Telcos Have Klout In Cloud?
The Mobile Gap Between Business And Consumer
2015 Will Be A Very Interesting Year for Hybrid InterClouds
Computing Deployment Models And Cloud Traceability