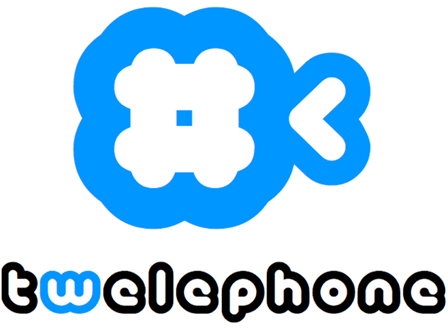 Twitter has over 500 million user accounts worldwide of which 200 million are active at least once per month or more. In the Netherlands there are 3.3 million active twitter users of which 1.6 million tweet daily.

Right now WebRTC (and Twelephone) are PC only (supported by Firefox and Chrome browsers) but with browser based OSs for smartphones and notebooks coming up it will not be long before WebRTC enters the post-PC era.

What’s really cool is that Twelephone now has given every twitter user a VoIP SIP address – mine would be sip:pbilderbeek@sip.twelephone.com – allowing any caller from a SIP soft phone such as Blink, Lync, or Cisco to call your web browser using WebRTC. Using the Tropo API Twelephone is also experimenting with calling regular PSTN phone numbers from Twelephone or vice versa.

As we wrote before, the future of communications is inside the app, have a look at the Twelephone roadmap to see what else is coming in the future.