“If I can operate Google, I can find anything… Google, combined with Wi-Fi, is a little bit like God. God is wireless, God is everywhere and God sees and knows everything. Throughout history, people connected to God without wires. Now, for many questions in the world, you ask Google, and increasingly, you can do it without wires, too”

Well, things have changed since then. Eight years later Facebook shows social trumps search and Apple shows apps trump the Web. The Google/Web and the Microsoft/Intel hubs no longer dominate the connected consumer ecosystem. Google and Microsoft are losing market dominance to Facebook and Apple. So what is this ecosystem, what are the standards, who are the actors, and what is happening and why? This is the first of a series of blog posts designed to provide a more holistic view of what The METISfiles calls the connected consumer.

A connected consumer interacts with and consumes digital content through a connected device. There are 2 billion Internet users worldwide according to the latest statistics.

The ecosystem that makes this possible is shown in the graph below. 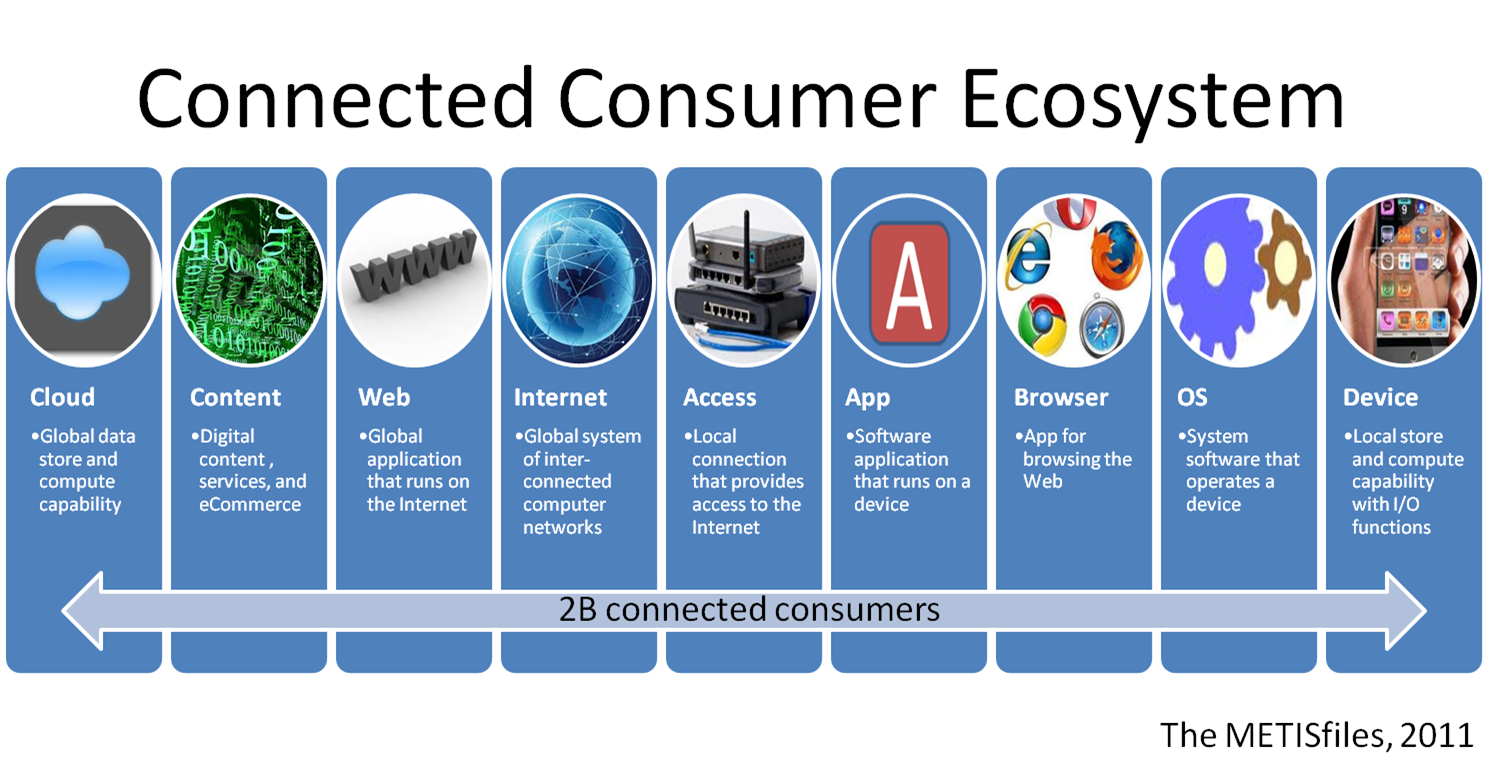 The ecosystem consists of infrastructure (cloud), content (content, web), connectivity (Internet, access) and device (app, browser, OS, device) parts. A short description of the different parts and their function in the ecosystem follows below.

Cloud. Provides global data store and compute capability. The METISfiles defines consumer, customer and enterprise clouds. A consumer cloud is a cloud where consumers have no privacy, no guaranteed quality of service, which is based on shared infrastructure and built on custom developed hardware. We recently wrote about the Apple iCloud as an example of a consumer cloud.

An ecosystem consists of hubs or connectors that drive and influence ecosystem behavior. Examples of hubs are:

Those companies that are able to drive and govern a hub are rewarded with greater market power, profits and revenues than those that are not. The Wintel (Microsoft Windows and Intel) combination has successfully led the PC hub for twenty years. Google has done the same for the web hub for ten years. Operators have led the access hub in this century and for most of the last century.

But there are power struggles within the ecosystem and within hubs. In addition, new hubs are emerging:

Device vendors used to only provide access to HTML content and operator services. In a mobile/app governed hub, the device still does that, but also provides a tighter way of coupling content and device through apps. Content vendors now need to go through appstores to create tighter coupled content. Alternatively, the HTML5 standard, that allows tighter coupling of device and web, provides an opportunity for the web hub to compete better with the app hub.

Here are some examples of major strategic moves within battles going on at the moment.

February 2011. Microsoft’s alliance with Nokia is a clear sign that Microsoft is tightening the link between mobile hardware and Windows Phone 7. With Windows Phone 8 this integration is likely to be strengthened even further.

June 2011. Rather than have Apple take a 30% cut of in-app subscriptions for iOS publications, the Financial Times launched a HTML5 Web app that bypasses the Apple appstore and enables readers to access content across tablets and smartphones.

Later this year. Amazon is slated to launch a tablet at a price of around $250. The tablet is based on a tweaked version of Android. Amazon has integrated all of their services on the device: content store, book reader, music player, movie player and app store are all Amazon owned and branded.

The above is only a brief introduction to the connected consumer ecosystem. The METISfiles will write more about the ecosystem wars and how they relate our connected worker research theme in the future so stay tuned!