You are here: Home > Elastic Enterprise > Data Centers and the Cloud

The METISfiles presented at the DatacenterWorks BICSI Conference in The Open, Tiel, on April 15. Pim Bilderbeek, Principal Analyst, wrapped up the event with a presentation on how Data Centers are changing under influence of the Cloud.

Modular systems are now emerging that include the data center and physical computing layer in a single system. Already Microsoft is building modular data centers based on this principle. One of the key advantages of the modular approach is that CAPEX can be more aligned with OPEX. For when demand increases a new module can easily be rolled in and hooked up.

Although integration and consolidation of the three data center layers is increasing, the interconnectivity, management, automation and orchestration of the single items is becoming more important. In the cloud, a virtual machine workload is no longer tied to a physcial location and server in the data center. This means that power and cooling need to be dynamically informed of virtual machine and workload movements in order to achieve efficiency and ultimately lower costs in power and cooling. The figure below highlights the trends discussed above. 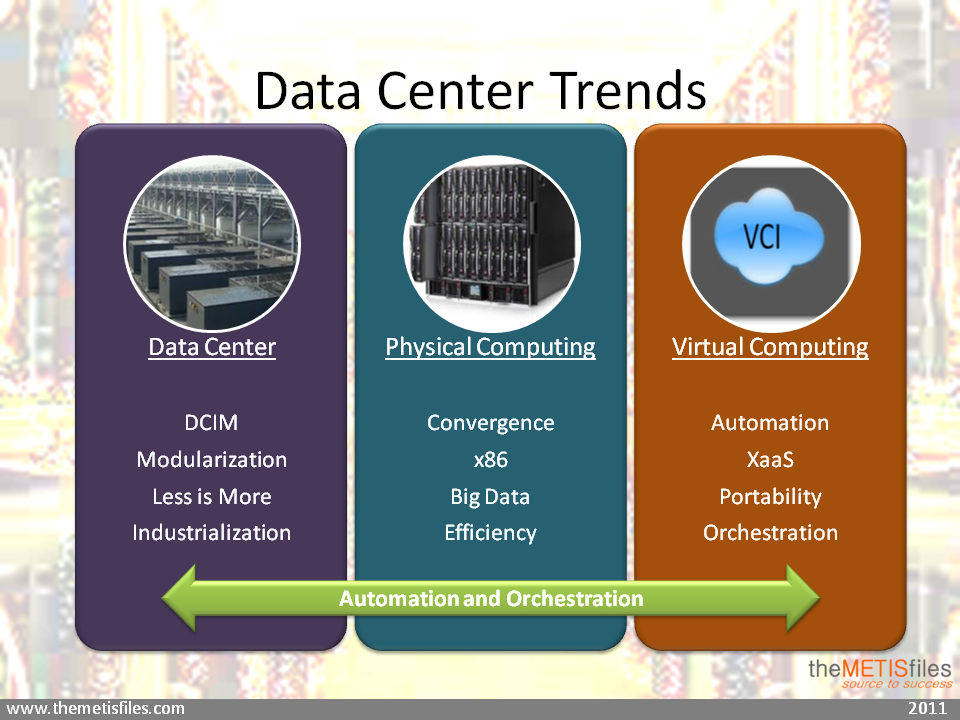 In the future, if the happy cloud scenario comes true, we even expect that a global data center grid will emerge connected by the InterCloud. New business models and companies will emerge that exchange, bill, federate, and aggregrate the clouds in this global data grid.

Below you can find the slides of the Data Centers and the Cloud presentation. The slides are embedded in this post but can also be downloaded on slideshare.

Do you have a vision on data centers and the cloud that you would like to share with us? Would you like to have Pim Bilderbeek present at your event, or for an internal company meeting? Let us know!

From IT department to cloud service desk
Do Telcos Have Klout In Cloud?
Dutch SaaS CRM Opportunity
State of the Dutch Cloud