You are here: Home > Connected Consumer > Who is afraid of Facebook and Skype?

The worlds of social networking and telecommunications are coming closer together. With speculation over a deepening partnership (acquisition even?) between Facebook and Skype, and the recent launch of Hyves Mobile on the T-Mobile network in the Netherlands, it makes sense to look at what is at stake here.

The figure below provides insight into the different players in this space and their heritage. Traditional telecom operators such as KPN, Vodafone and T-Mobile come from a networked communications world. They monetize their dominance through traffic and subscription fees. Web communications firms such as Skype deliver over the top web based communications, with Skype to Skype communications for free and Skype Online, SkypeOut or Skype Connect service for a competitive fee. Device manufacturers like Apple launch free video calling services (FaceTime) and (partially paid) online mobile services (MobileMe). Google is offering Google voice providing a single number, voicemail, and low-cost calls. Also, Google has entered the social networking space through its launch of Google Buzz. Facebook, Twitter, Hyves, and LinkedIn all come from the social networking world and make money (well, not Twitter) through advertising and games. Hi Society, T-Mobile MyFamily, and Vodafone 360 are examples of entries into the social networking game by KPN, T-Mobile, and Vodafone. Hyves mobile is the recently launched Hyves MVNO. 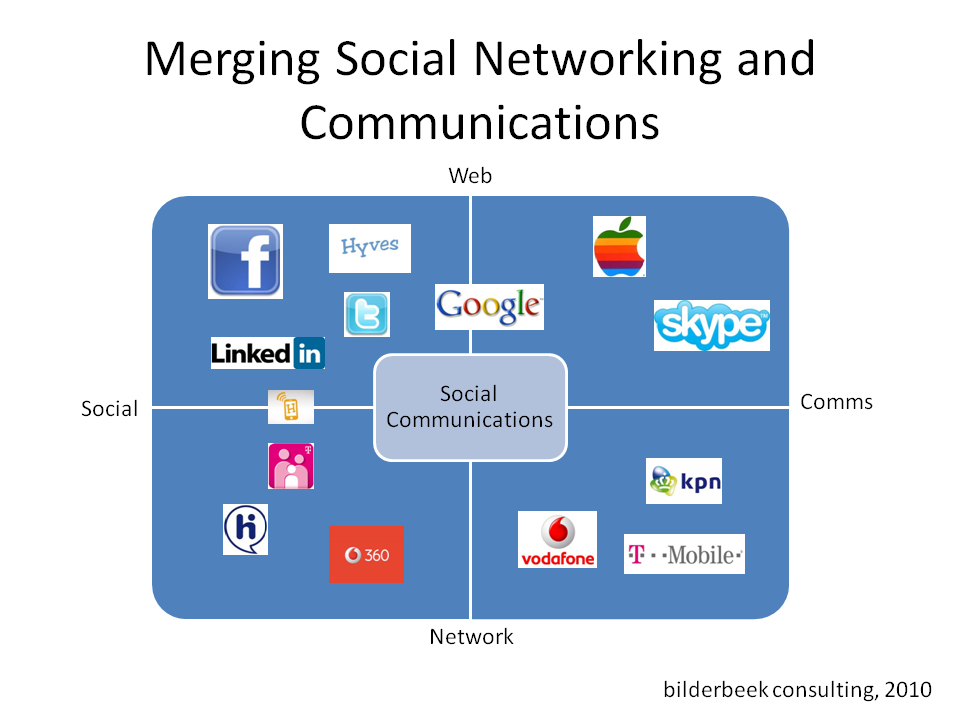 These four worlds operated separately for some  time, but are now coming closer together. The recent addition of Facebook news feeds and phonebook in Skype, the addition of Facebook mail, the speculation on a Facebook video calling feature are all signs that Facebook is closing in on the communications world. The launch of Hyves mobile is witness of the same.

What’s the advantage for Facebook and Skype? Skype’s portal is becoming more sticky as Facebook users do not have to navigate away from Skype to use Facebook. In addition, a social message on Facebook is likely to trigger a (paid) call on Skype. If Facebook users are to get Skype functionality, they do not have to navigate away from Facebook. They can use the Facebook directory to initiate and complete Skype calls, and Facebook can introduce new social games that use Skype voice, video, sms or other alerts.

What’s the advantage for Hyves and T-mobile? For Hyves, being a local Dutch social networking player, the partnering options are limited. There is no real local Dutch player with dominance in web based communications to partner with. Aside from partnering with a niche player or build their own communications web infrastructure,  the only option with real impact is to create a MVNO. This MVNO creates an additional revenue stream for Hyves on top of advertising. For T-Mobile, the pipe is getting filled with paid traffic that otherwise might have gone elsewhere.

Where does this leave the other players? Operators have been creating their own social networking  initiatives (see above). None of these “walled garden” initiatives, however, enjoy the same success that the web-based players have.

How can operators reinsert themselves into the social networking value chain? Operators should rapidly start initiatives like the one Vodafone and TomTom pioneered with HD Traffic. Smartly combining or mashing up network assets and intelligence with databases and applications. They should hurry, because even location information is no longer only available to the operator, Google already does a very smart job through combining mobile, wireless and gps information.

The other big danger for operators is the worldwide phone/mail/video directory that Facebook and Skype are creating. If communications can be engaged with a push on the button within the social networking portal, the risk is very high that the ensuing communication that is triggered is either free or Skype paid, but not operator paid.

What do you think operators should do? Let us know!

Vodafone and the Enterprise Cloud
Dutch Public Cloud To Reach Euro Billion Milestone in 2016
The Big Switch: From BPO To BPaaS
Mobilising People And Enterprise