You are here: Home > Elastic Enterprise > Twelve Reasons Why Telcos Will Not Dominate Cloud Computing

This post is all about the second item. It is important for telcos to find new revenue streams. A recent study by ITCandor shows that in 2010 worldwide telecom services were flat while hardware and software enjoyed double digit growth and IT services single digit. The worldwide cloud computing market is growing fast, a recent Gartner study projects cloud to be worth $148.8B in 2014, up from $58.6B in 2009.

Many IT firms that want to capitalize on the opportunity of selling cloud technology to operators such as HP, Oracle, IBM, and Cisco say (see links) that telcos have important capabilities that are crucial to cloud. They all have similar arguments. Telcos have a strong brand, telcos have a large customer base in enterprise, smb, soho, and consumer customers, telcos can provide end-end SLA, telcos know about billing a large customer base.

While we are not doubting that cloud can play an important role in lowering costs for operators and make them more nimble, we do have our doubts whether telcos can compete in the cloud computing market. Here are twelve reasons why:

2. Telcos believe that if they build their own datacenters and combine this with their own infrastructure they have a killer cloud offering. This is wishful thinking. First, telcos are not very good in building data centers to begin with, especially those with cloud scales. They will never be able to compete at cost and agility with the likes of Amazon and Rackspace. Second, there is no value in a merged data center/communications infrastructure  telco offering if over the top providers can build overlay networks across telco networks. Telcos can be a trusted provider of connectivity to cloud services players, but the fact that they have the control of the network will not give them control of the customer.

3. The cloud computing market can be sliced into layers defining business process, applications, platforms, computing infrastructure and network infrastructure (see figure below). Although telcos dominate the network infrastructure part, they will not have much presence in the other segments as they will lose out on important assets such as customer relevance and intimacy in business process and applications and agility and flexibility in platform and computing. The most common telco mistake is to take a vertical slice integrating these horizontal offerings and sell the slice on reliability and reach features to a customer that is looking for relevance and agility. 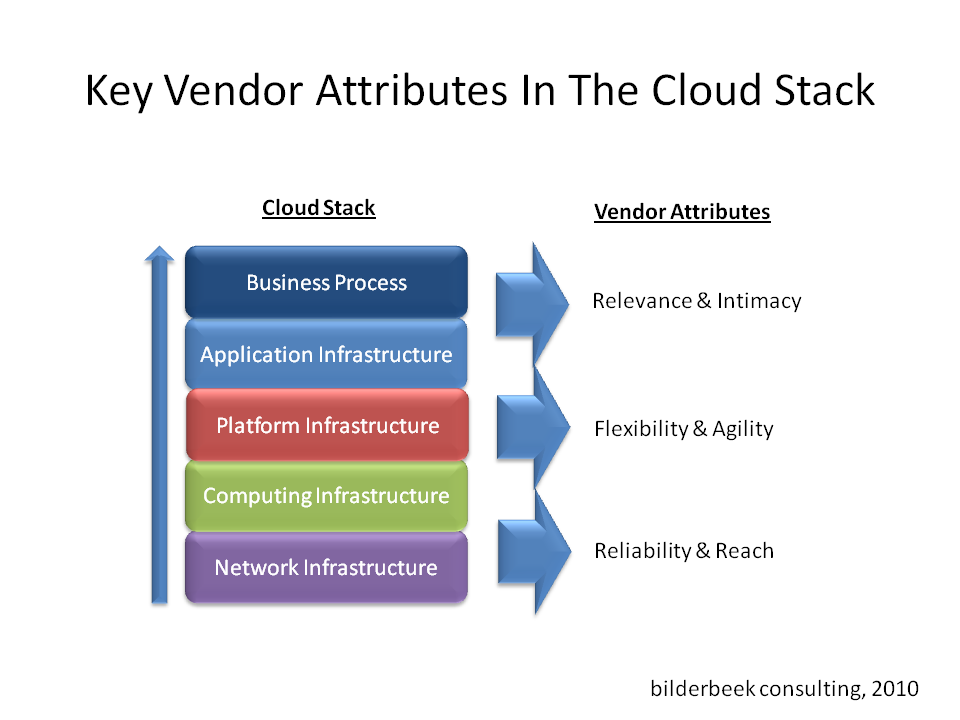 4. Telcos are by nature risk averse and are not very good at developing new services. They  rather copy existing best practice services from elsewhere, and compete on brand and price. It will take a bold move by a telco to succeed in cloud computing by copying and competing on brand and price, and that is not on the cards.

5. Some say that telcos will have an opportunity in monetizing the enterprise mobile cloud. However, telcos already lost the consumer mobile cloud content and application battle to the device and platform manufacturers. There is no compelling argument why they would win in enterprise. Mobile is just another network to access enterprise information.

6. Telcos are good at billing. Although it is true that telcos have ample experience with billing large amounts of customers, we would not wish the current state of telco billing onto cloud services players. The billing operations of the current telco are still huge, costly, and inflexible. As a matter of fact, many telcos are outsourcing part or whole of their billing operations. Telcos do have a billing relationship with customers, but so do credit card companies and banks. Those that buy online favor the likes of PayPal.

7. Telcos have end-end SLA control. Not quite true. They may have end-end control of the connectivity layers on their own networks, but they do not have control over the performance of the applications, or over those segments that are off net.

8. Some say telcos can be aggregators and distributors of cloud services and applications. In reality, telcos are not great in distribution and commerce. Telcos do not have portals where droves of SMBs come to buy products and services outside core telco offerings. Telcos do not have very elaborate partnering strategies for selling their own services.

9. Telcos have outsourced IT operations, IT assets, network operations, network assets, and more in a quest for increased profitability. They have strategically prioritized on non-network functions and are today building brands, not networks. In fact, divesting network ownership and sharing network infrastructure is a key strategic issue for many operators in increasing the bottom line. This is not a good starting position for competing in a market where technological and business process innovation is core.

11. Consumer and business VoIP providers (offering communications as a service) have taken away large chunks of operator revenue in fixed and are threatening to do the same in mobile. Skype is now the largest long-distance phone company. If telcos fail in defending their core communications business to cloud, why should they be able to compete in software, infrastructure or platforms?

12. A large proportion of the cloud market is advertising based, according to Gartner’s cloud sizing definition. Telcos lack the proper Internet portal that will draw enough eyeballs to satisfy online advertisers. They will not be able to get a large chunk of this money.

Having said the above, we do believe there is a place for telcos in the cloud. This place will not be end customer facing, but more in the wholesale part of the business. We will write more on this in future posts.

How do you think telecom operators should compete in cloud? Let us know!

Remote Access Is The New Normal
KPN and Nimbuzz: A Tale Of Two Companies
Telcos Beefing Up Cloud Efforts
IT Through The Looking Glass – Why Your POV Matters